The Most Depressing Time of Year? Suicide Rates Spike in Spring + MORE

The Most Depressing Time of Year? Suicide Rates Spike in Spring

The sun is shining, the birds are singing, and woodland creatures are literally coming out to play—it’s like a Disney movie out there. But while springtime seems hyper-cheerful, not everyone feels that way. For some people, the season can be especially tough, and sadly, research shows that suicide rates tend to spike in spring.

One possible culprit for feeling low this time of year is seasonal affective disorder: It's typically associated with winter, but warmer temperatures and brighter days aren't always enough to lift the blues. What's more, seeing cheery people all around you is a constant reminder that others are having a good time when you aren't, says Michelle Riba, MD, professor and associate director of the University of Michigan Comprehensive Depression Center.

There's also a phenomenon called summertime depression, she adds, which means people may start to get sad when spring arrives. “We don’t really know why. It may be hormonal for women, and there are theories related to melatonin production, but we’re not sure,” she says.

And then there are social influences that can bring a person down: This time of year, "people go on vacations, and some groups may be disbanding for the season," explains Dr. Riba. "So there may be less structure and a sense of support in place.” Meanwhile, you're watching friends enjoy those picture-perfect vacays on Facebook or Instagram. “You wish well for everybody but sometimes you can experience jealousy and envy when you see this," says Dr. Riba. Especially if you happen to be struggling with challenges in your own life, like a bad breakup or financial concerns.

Given these factors, it may not seem so surprising that suicide rates rise this time of year. Suicide rates spike in the spring and to a lesser extent in the fall, according to the Centers for Disease Control and Prevention, not around the holidays as everyone suspects. And in fact, suicides in general have increased 24% between 1999 and 2014, according to a CDC report released in April. The uptick begins in early April and late May. Why? The seasonal brightness may actually have something to do with that: In a recent op-ed in The Washington Post Harvard professor of psychology Matthew Nock cited a 2014 study published in JAMA Psychiatry that found that as hours of sunlight increased, so did the risk of suicide. "The authors speculate that sunlight could boost energy and motivation, thus giving people who are depressed the ability to take action and make a suicide attempt," he wrote.

And some researchers are looking at suicide rates at times of high-pollen counts compared with less pollen, theorizing that the increase might be due to increased anxiety or aggression related to inflammation, according to Vox…

Whether it's kids squabbling in the back seat, work stress, or your phone constantly pinging, countless things can distract you when you're driving. But are certain distractions riskier than others?

That's what researchers from the University of Houston and the Texas A&M Transportation Institute wanted to find out. In a new study (funded in part by the Toyota Class Action Settlement Safety Research and Education program), they observed how drivers coped when distracted by absentminded thoughts, emotions, and text messages.

The authors noted that while many studies have explored the dangers of texting and driving, there's less research on how other kinds of stressors can affect your behavior at the wheel. But their results indicate that the worst kind of distraction may indeed be checking your phone.

The researchers found that people who drove while absentminded or emotional benefitted from a "sixth sense" instinct that helped them navigate safely. Meanwhile those who were texting while driving did not experience the same protection.

RELATED: This Smartphone App Blocks Teens from Texting While Driving

The three types of distractions all increased the drivers' perinasal perspiration levels, and caused them to be more jittery. But when the drivers were asked cognitively challenging and emotionally stirring questions, they were able to maintain a straight course; while texting led them to veer out of their lane.

Lead researchers Ioannis Pavlidis, PhD, and Robert Wunderlich speculate that the driver's trajectories remained straight under cognitive and emotional stress thanks to the intervention of a part of the brain called the anterior cingulate cortex (ACC), which provides a "fight or flight" reflex. "For sure, there is corrective action precipitated from some brain center, likely the ACC, when we are distracted while performing a routine dexterous task, driving in this case," Pavlidis says. "When this distraction is purely mental, this corrective mechanism works well."

RELATED: Constantly Reaching For Your Smartphone? You May Be Anxious or Depressed

But to do its job, your ACC requires eye-hand coordination: "It appears that an eye-hand feedback loop is needed for the brain to be able to accomplish these corrections," Wunderlich explains… 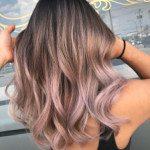 If you're tuned into skin-care forums, then you know that the brand Drunk Elephant has a wide stan base. People are loving the fact that the products' ingredient lists are stacked with acids, peptides, vitamins, etc., but free of what the company calls the "Suspicious 6." .... More »

The first thing I do in the mornings is look at my phone. That’s mainly because my phone is my alarm clock, but once my eyes are open and that screen is lit up in my hands, it’s an awfully short trip to checking emails and perusing headlines. There’s no reason for me to be doin.... More »

4 Ways the Keto Diet Can Affect Your Workouts + MORE

The low-carb, high-fat ketogenic diet continues to be the trendiest weight-loss plan around. Maybe that's because following keto is relatively simple: by cutting way back on your carbohydrate intake while eating lots of fat and a moderate amount of protein, your body goes into a state .... More »

The Super-Challenging Exercise That Helped Gal Gadot Get in &lsquo;Wonder Woman&rsquo; Shape + MORE

[brightcove:5597028796001 default] We’re never getting over our girl crush on Gal Gadot, who reprises her role as Diana Prince/Wonder Woman in this month’s Justice League. One move that got her superstrong: push presses followed by an active rest hold. "It works your triceps, shoul.... More »

This article originally appeared on RealSimple.com.  There’s a new Essie nail polish topping the pages of Pinterest and it goes by the name of Topless and Barefoot ($9; amazon.com). With summer just around the corner, you might think the most popular hue would be a bright pink or coral. .... More »

Posted in Health | No Comments »

« 6 Life Lessons from Legendary?Cosmo?Editor Helen Gurley Brown + MORE (Previous Post)
(Next Post) How Bad Is It to Have a Drink While on Antibiotics? + MORE »